A Canoe Club exclusive made in collaboration with orSlow, we developed two pieces inspired by vintage french workwear worn by railroad workers and engineers in the 1800s.

This is the kind of stuff that orSlow does best: Innovative reinterpretations of workwear classics. The fabric is a classic herringbone twill which has a super soft hand but tough enough to stand up to daily wear. Both pieces have been hand washed and distressed for that perfectly broken-in look and feel that will only get better over time. Let’s get into the details of these two great pieces… 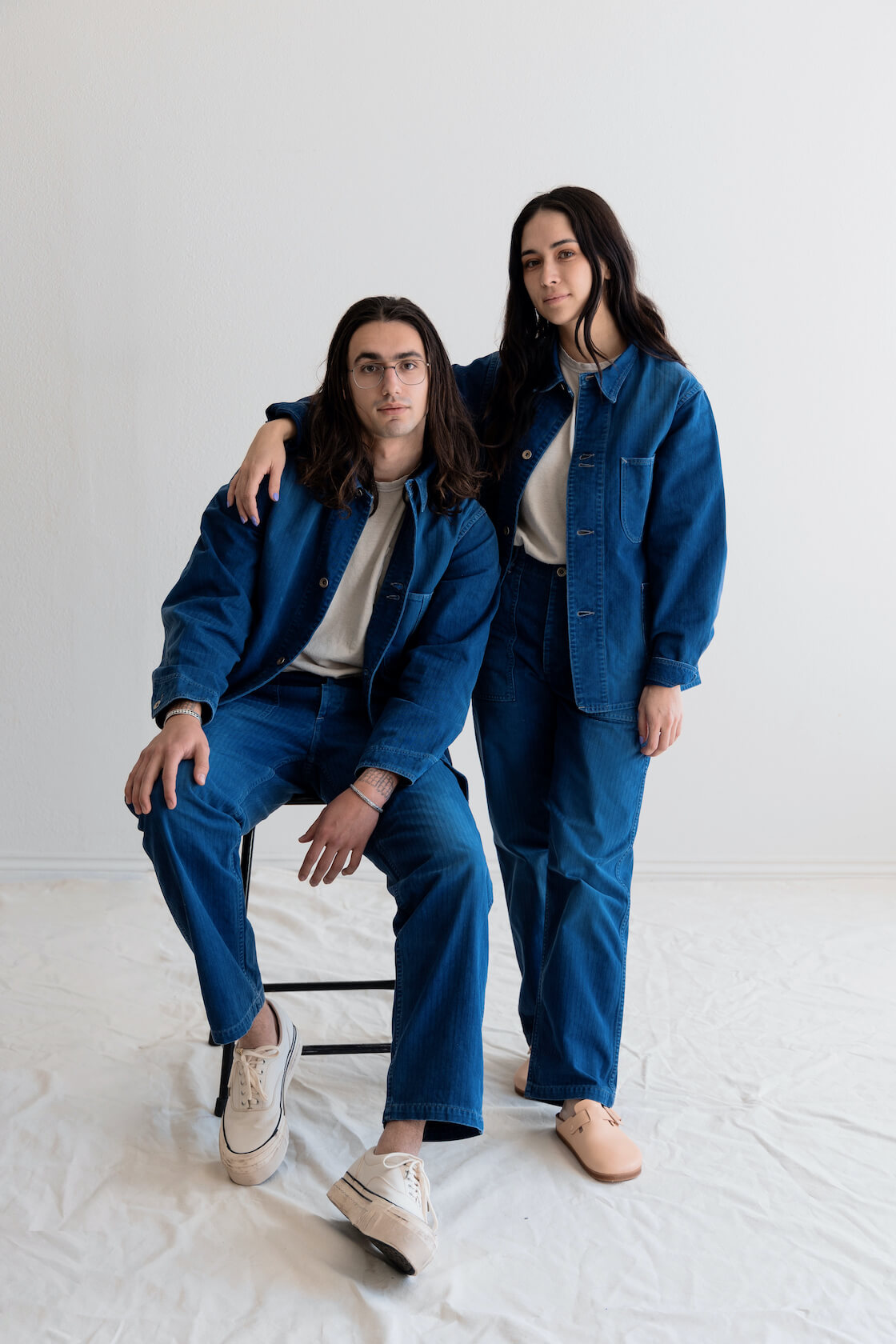 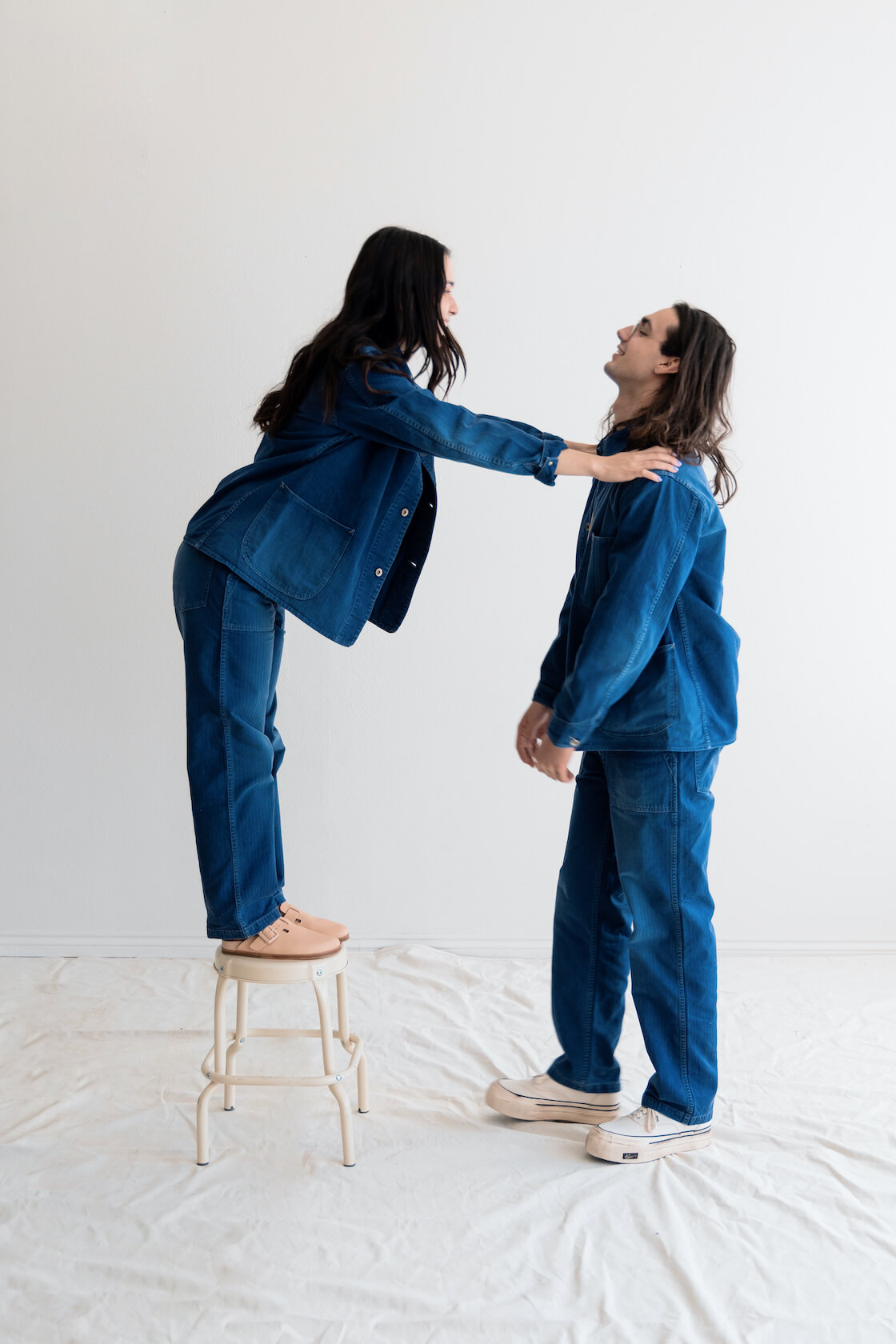 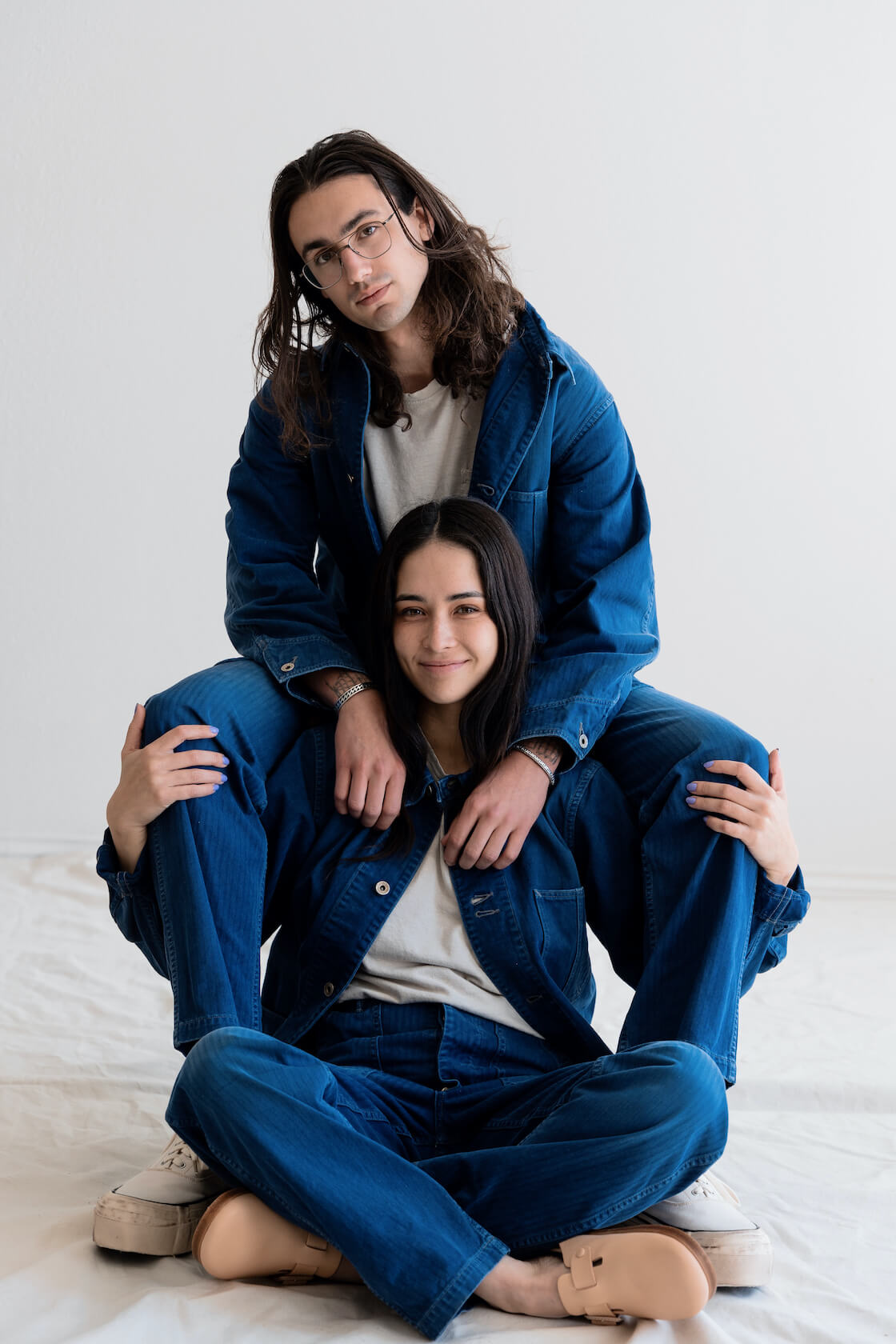 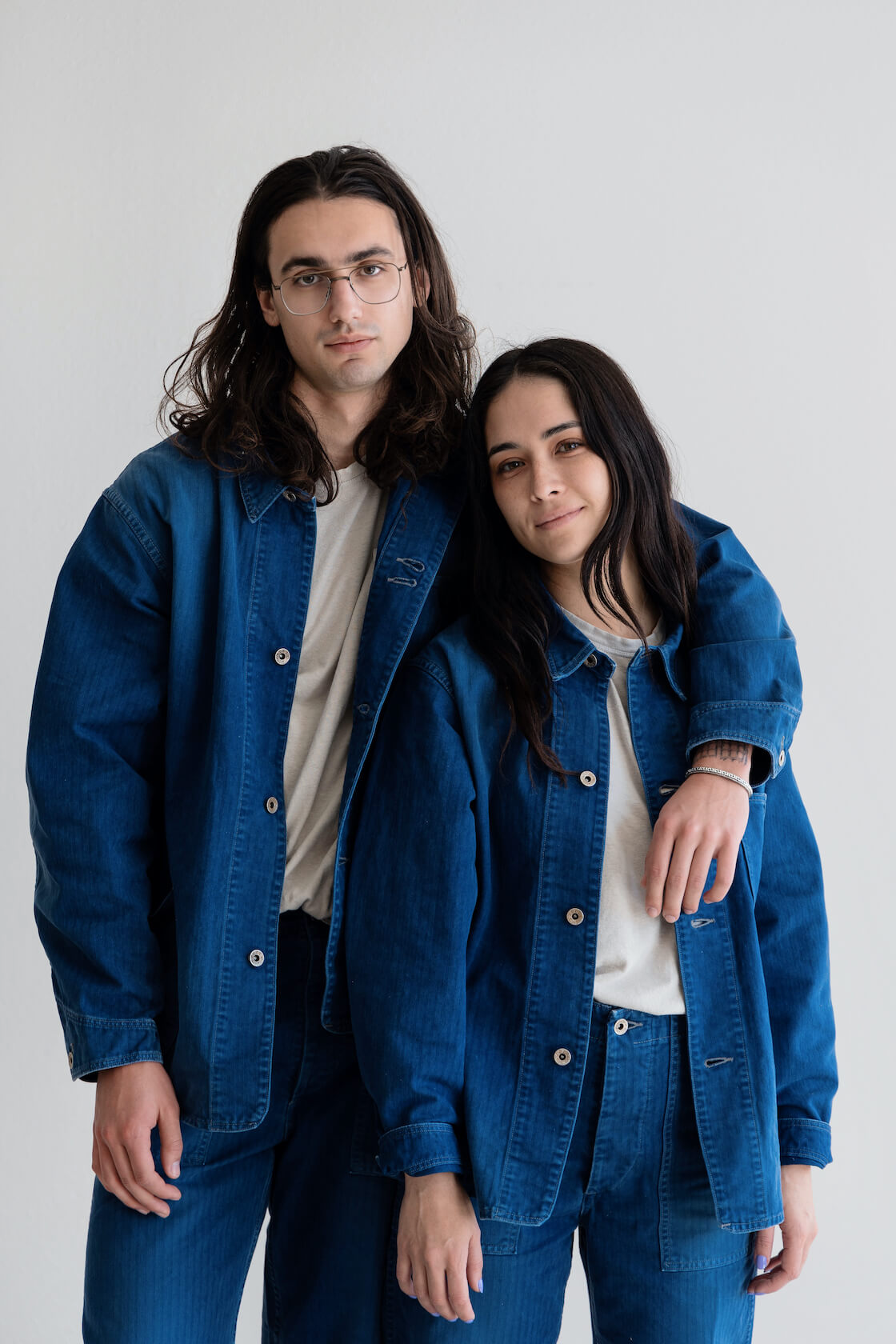 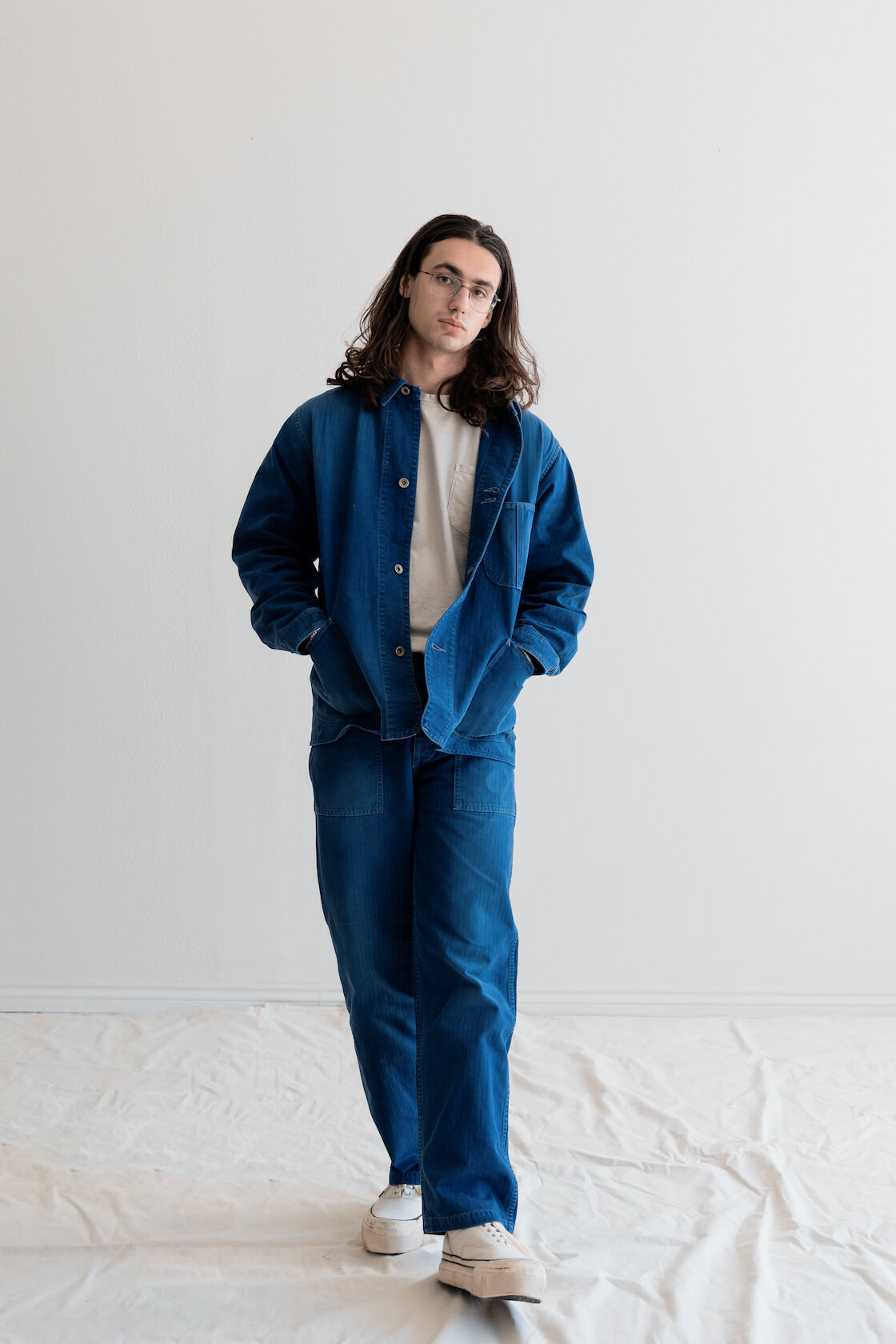 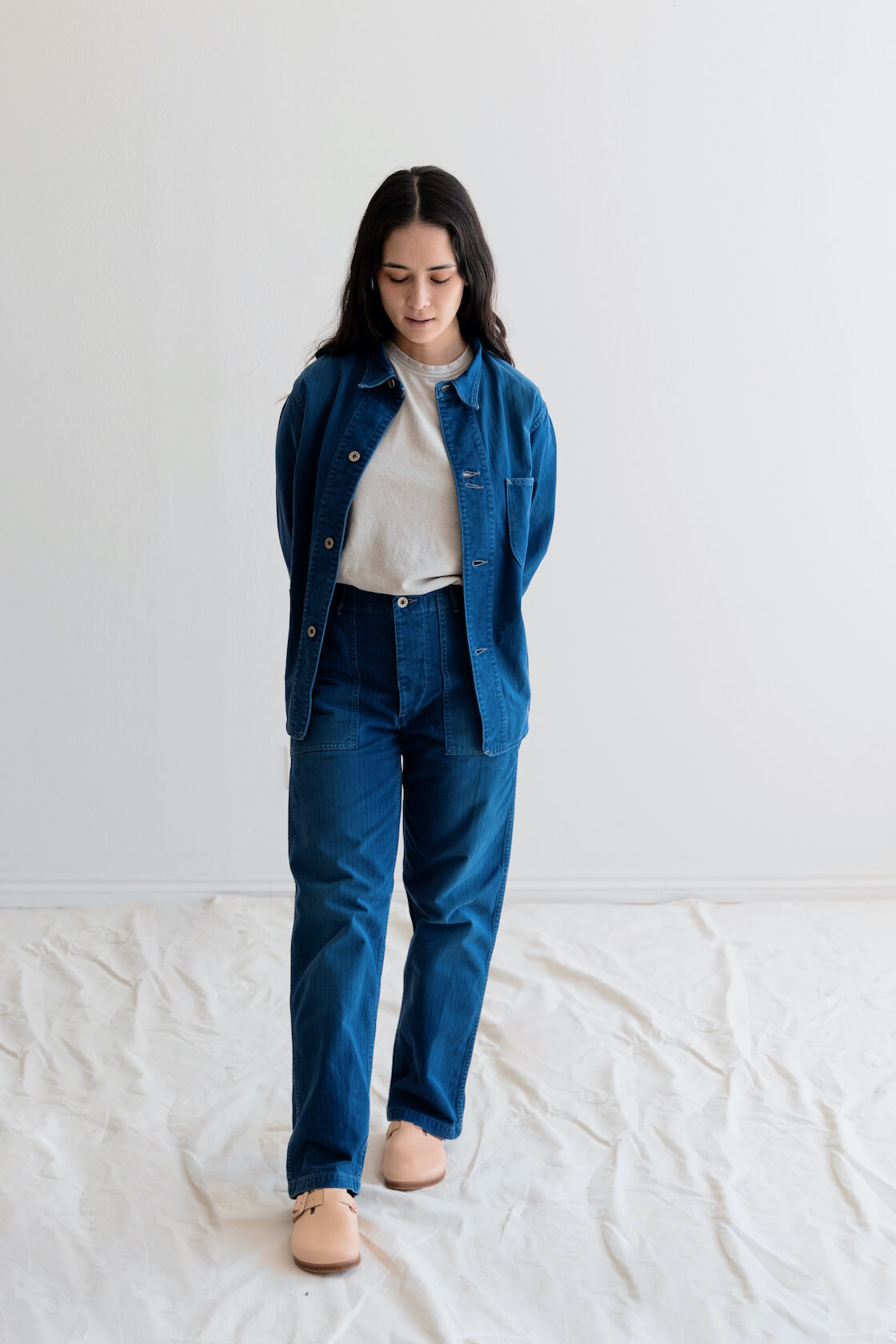 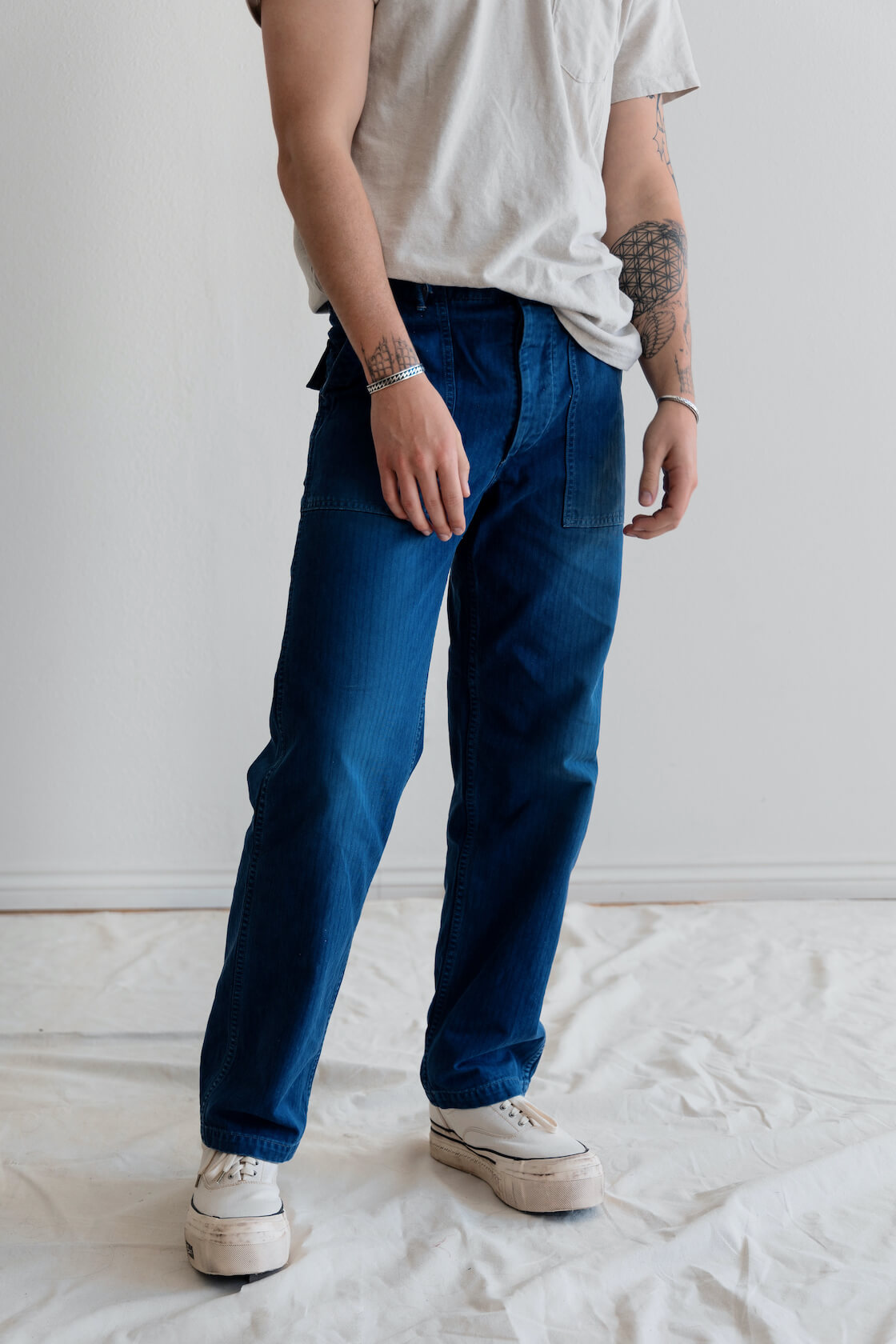 First, the pants. The standard fatigues have a top block that sits a little higher for a vintage fit that is more popular than ever and a straight fit with a slight taper that is relaxed without being sloppy. Finished with large fatigue pockets in front and flap closure rear pockets with donut buttons that feature stars and a garland. Additional buttons at either side allow you to cinch the waist tighter if needed. Four button fly with military style hidden placket. These are a utilitarian pant that are sure to become your new favorites.

It's hard to express how great this fabric is. Herringbone twill was first adopted into workwear because the perpendicular pattern provided increased durability and tensile strength, but its use is ancient. Herringbone is a broken twill weave that describes a distinctive V-shaped pattern. It is distinguished from a plain chevron by the break at the reversal, resembling a broken zigzag. The herringbone pattern dates back to the Roman Empire where it was used in road paving, textiles, and also for the jewelry of the ancient Egyptian elite. Its name is derived from the pattern of bones in herring fish.

Prior to WWII, the US Army issued blue denim jumpers and trousers (regular twill weave) for general use and matching khaki shirts and trousers for summer. In 1941, a green uniform made from herringbone twill was introduced to replace both. HBT uniforms were worn by US soldiers through the Korean War and were eventually replaced by the OG-107, made from cotton sateen which was more cost effective.

Keeping the details simple, but elegant - the pattern of the fabric takes center stage. Dyed in a beautiful ultramarine French Blue originally derived from powdered lapis lazuli, it's a wonderful alternative to indigo that works with any skin tone. 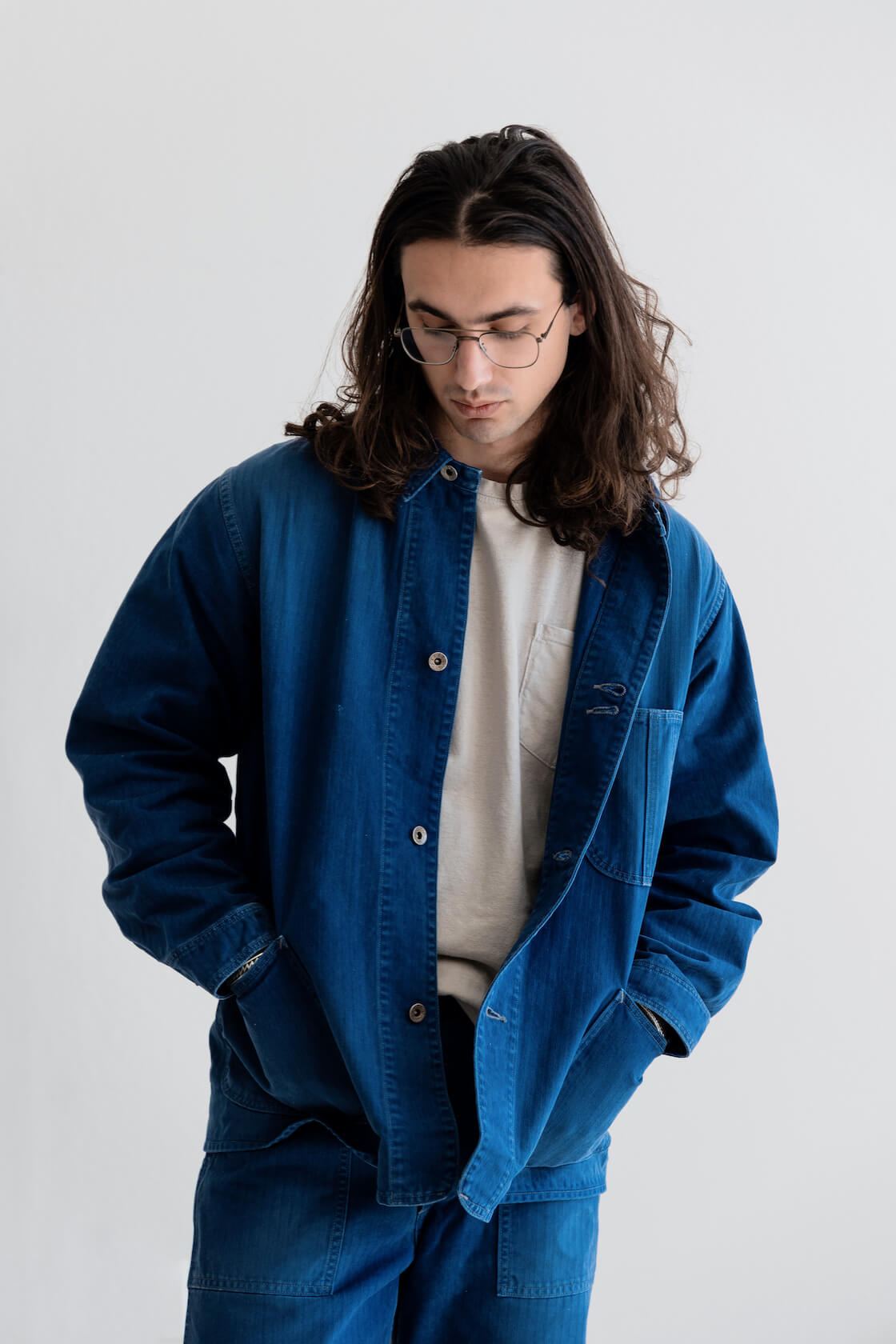 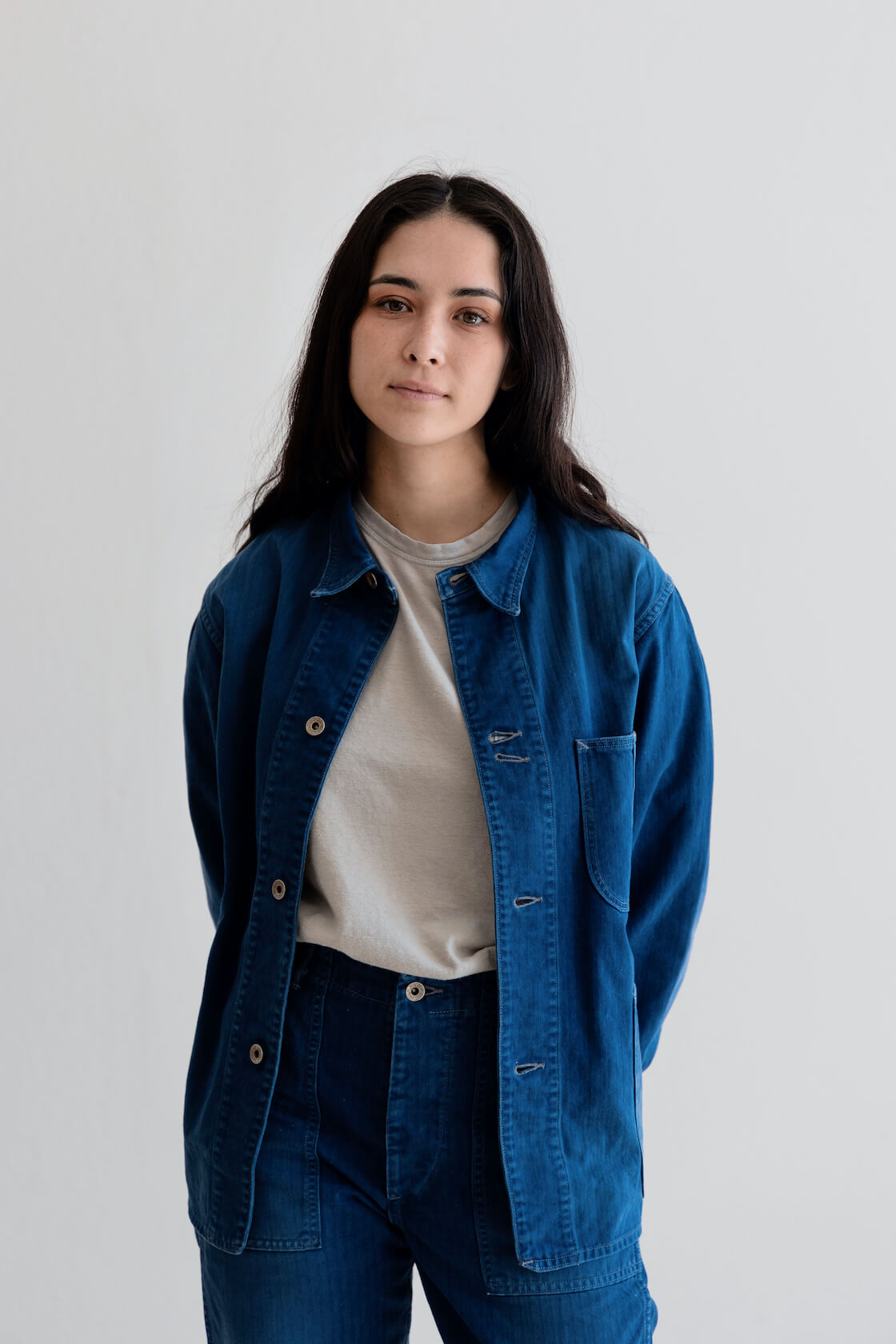 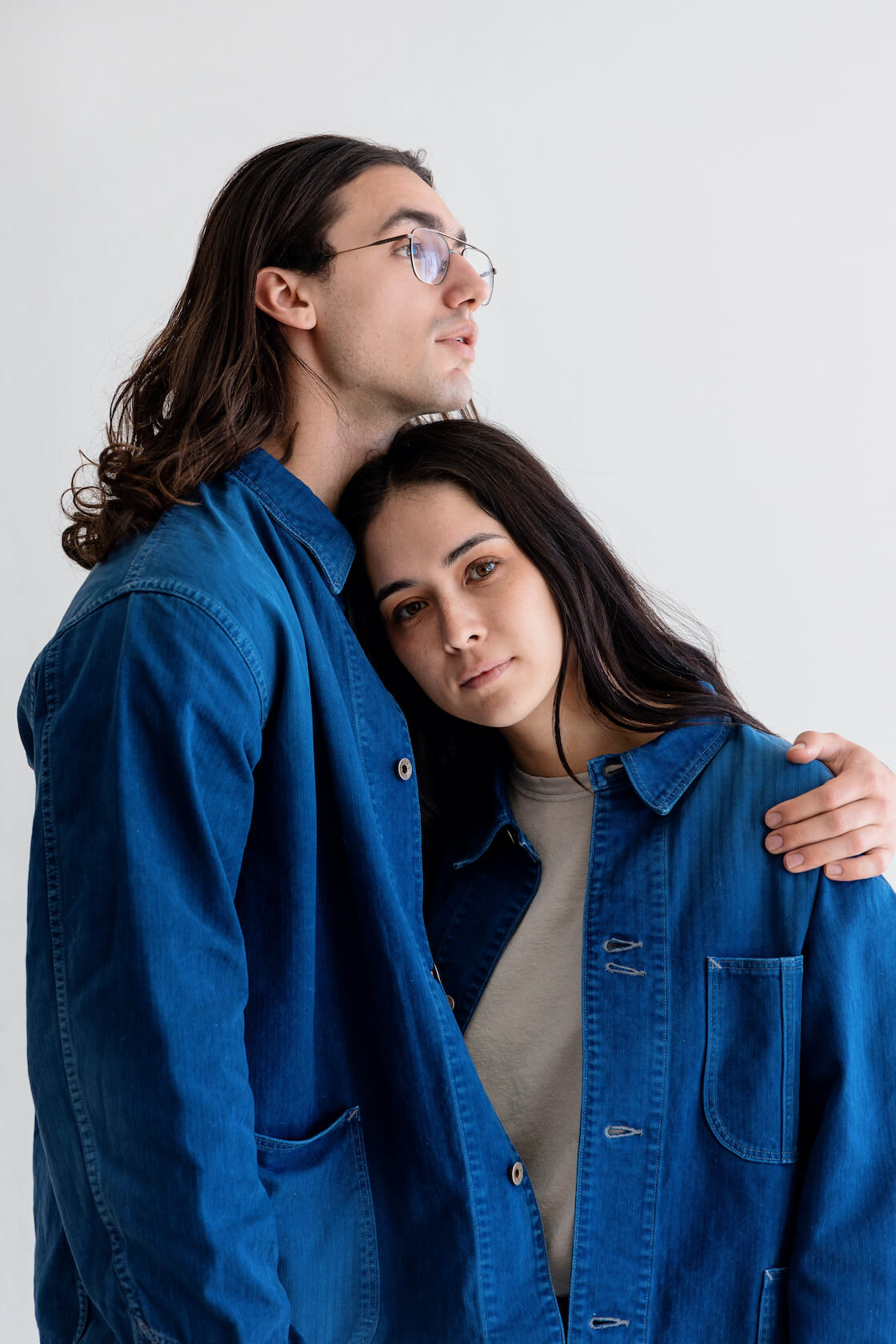 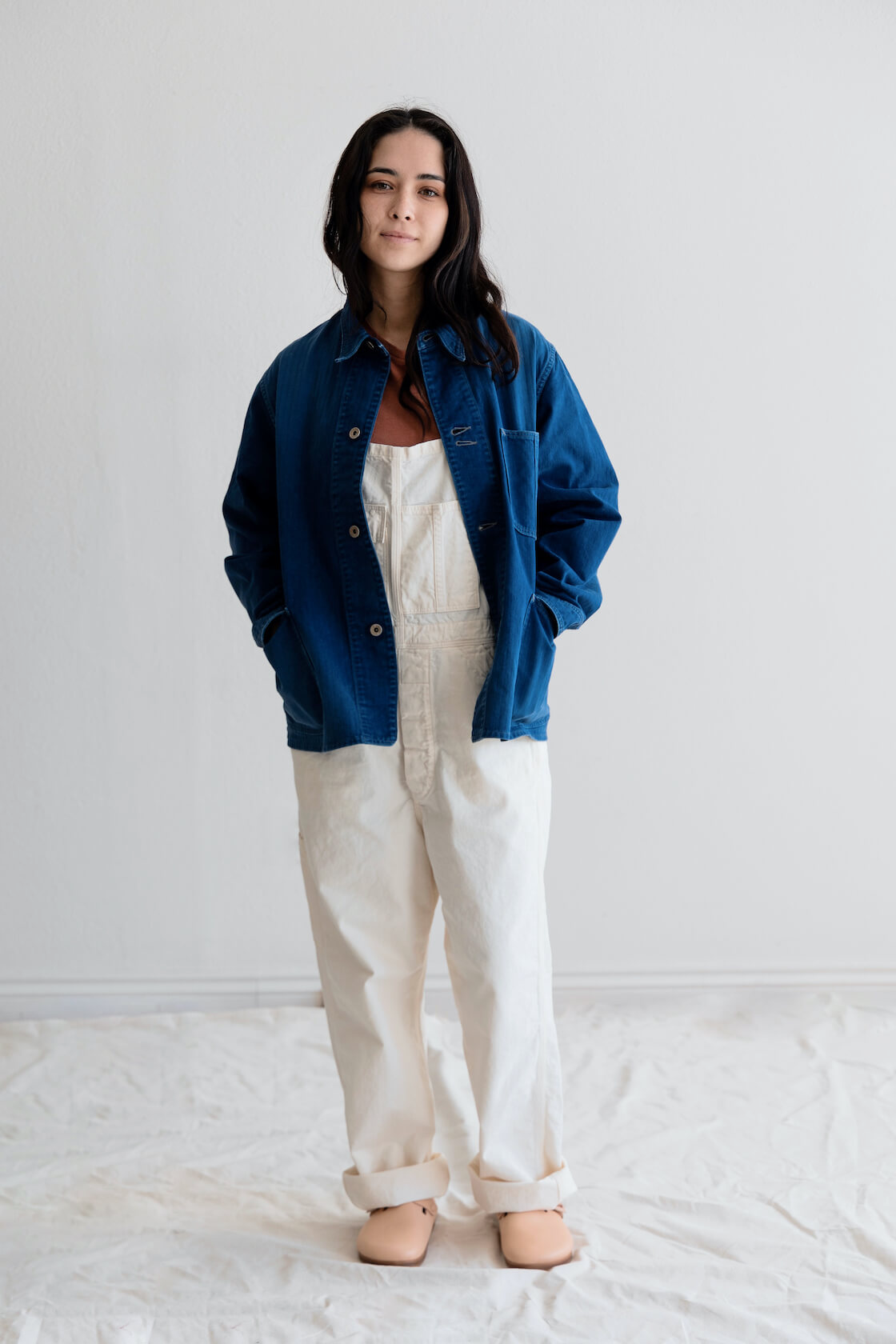 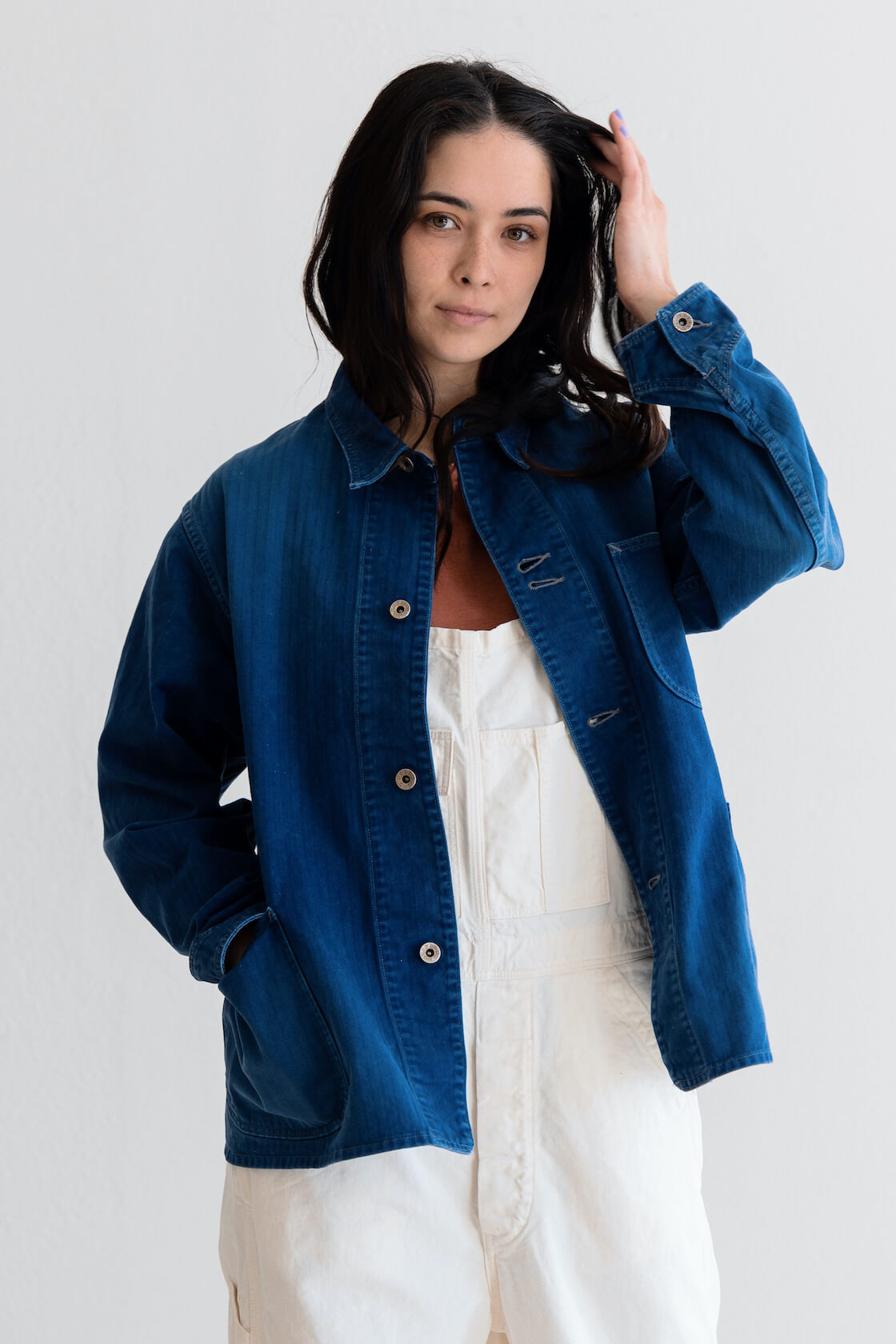 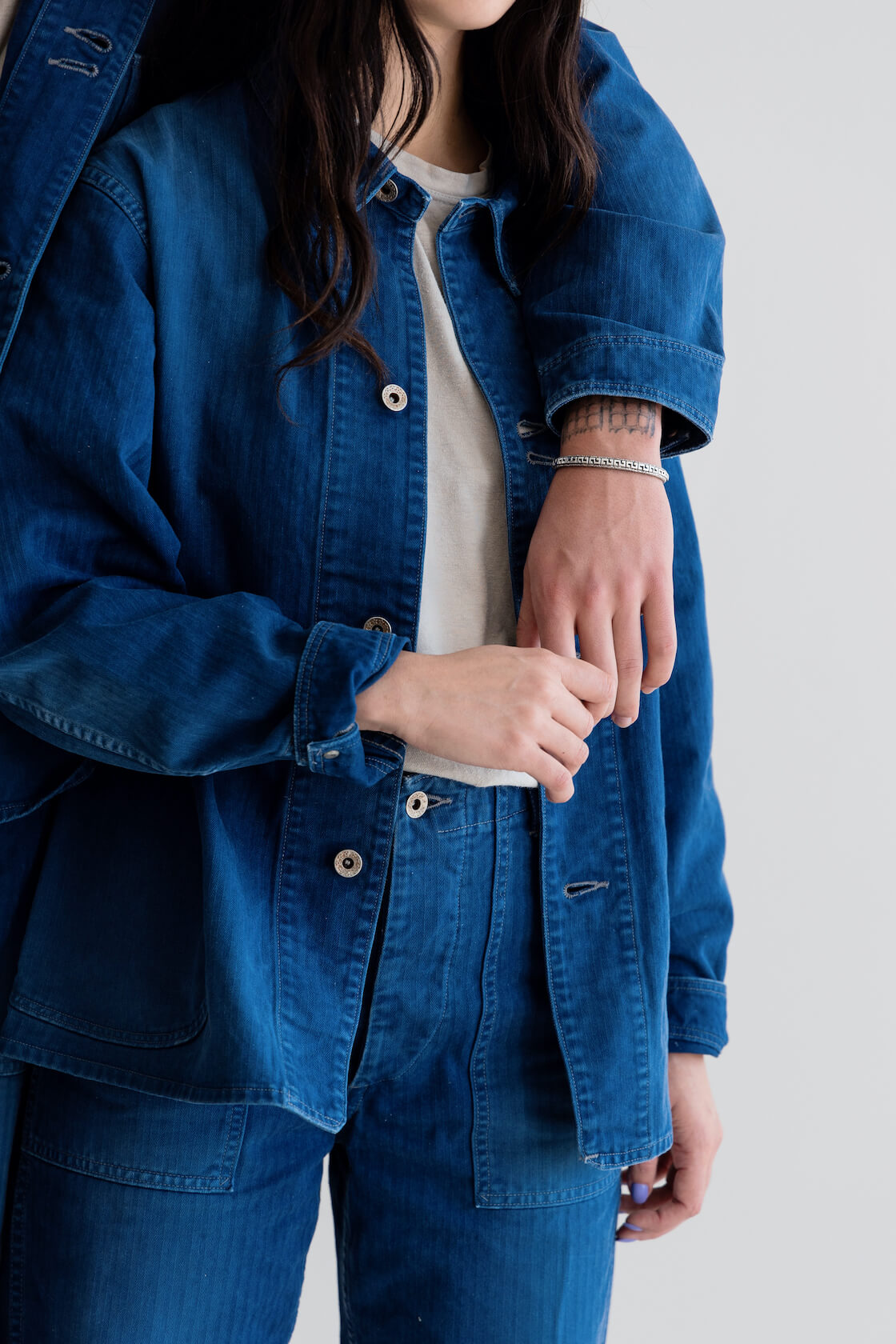 Based on coverall jackets from the 1940s blended with French railroad worker attire of the 1800s pre-industrial era, this jacket has a bunch of vintage details throughout. Printed and oxidized brass buttons like in the pants, a cuff with a profile similar to a gauntlet cuff (so that when folded back has an angular profile),  a single breast patch pocket with a pencil holder and seam down the middle, two large patch pockets at the waist with rounded edges, and an extra button hole just for fun. Araglan sleeve offers more mobility that will layer well and keep all the utility even when layering over a heavy hoodie.

The stitching at the panels and arm holes is a tough double needle chainstitch which is only capable of being produced on specialty machines like theUnion Special. Single needle stitching everywhere else - a specialty stitch that requires hand-guided equipment and finished with bar tacks where the stitching ends. This jacket has construction details that aren't obvious, but proves the overall quality even where hidden.

Together, this full kit is an easy decision when getting ready in the morning. It has everything you want without putting in any additional time into the morning routine. A suiting approach to casual workwear that has plenty of obvious refinement in the details. 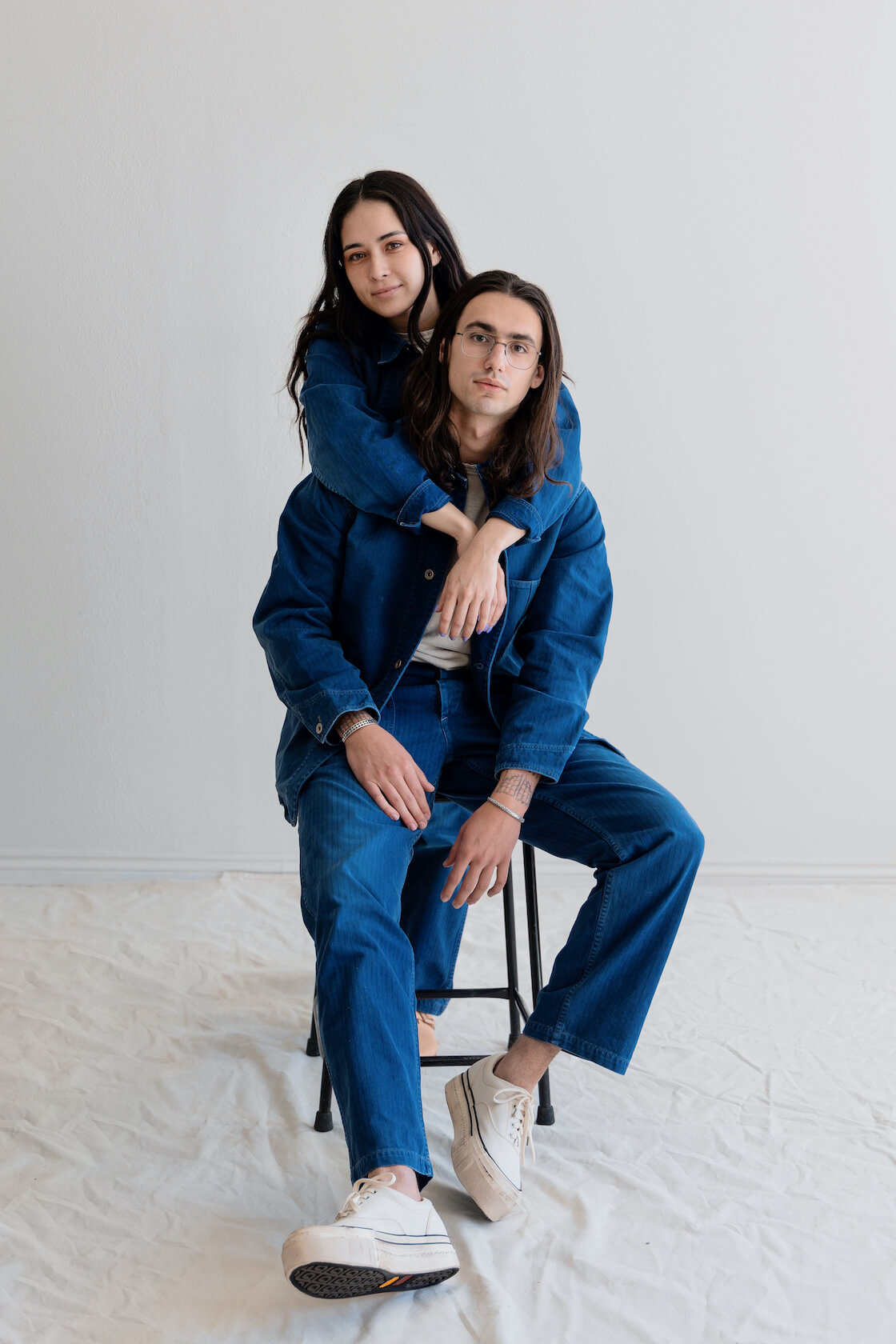 These sold out almost immediately when they dropped online. Ever since, people have been asking if we'll do it again. Chances are high that we will make these or a variation of them again in the future. Sign up as a text subscriber if you want to be amongst the first to know.

Be the First to pick up exclusive gear